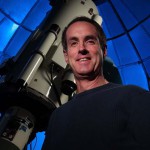 THIS WEB PAGE IS BEING TRANSITIONED TO A NEW SERVER AND UPDATED.

It should be working in a week…!

Hello. I’m a faculty member in the Department of Astrophysical and Planetary Sciences of the University of Colorado, and Former Director of the newly remodeled Fiske Planetarium, the most advanced planetarium in the U.S. and the largest between Chicago and the Pacific coast.

I teach ASTR3800, “Astronomical Data Analysis and Computer Programming,” ASTR1020, “Introductory Astronomy – Stars and Galaxies,” ASTR1010, “Introductory Astronomy – The Solar System,” as well as sometimes a seminar on “Excellence in Teaching.” The latter is similar to the workshops I presented nationally as Education Coordinator of the American Astronomical Society.  Many people have requested my materials for Teaching Scientific Thinking Using Pseudoscience.  These are designed for use in any introductory college or high school science class, fun to use, and successful.

My prior research included discovery of sunspot cycles and the rotation of solar-type stars, and the measurement of the elements in the oldest stars, testing theories of primordial nucleosynthesis in the Big Bang.

My current research is in the area of teaching physics and astronomy, especially to non-science majors. I often work with the CU Physics Education Research Group, one of the most successful research programs in the nation studying university-level science teaching.  Here are some of our results on the effect that cell phone and laptop use has on student grades, and the latest cell phone results (2013).

My first job was as a Carnegie Fellow, with the group that first found sunspot cycles on other stars and the rotation of stars like the sun, from the modulation of Ca H and K lines.  I then joined the staff of the Hubble Space Telescope. In 1992 I went to Chicago, where I pioneered a new kind of job track that combined public teaching at a planetarium (Adler) with a faculty position at the University of Chicago. My vision calls for astronomers to work in a Planetarium while still remaining active in research, so that they can bring the latest discoveries to the public. That path has now been followed by more than a dozen astronomers at the Hayden Planetarium in NY, at Adler in Chicago, the Denver Museum of Science, and elsewhere. Previously I served as National Education Coordinator of the American Astronomical Society and as a science commentator on National Public Radio. A short biography is here. My complete CV is here.

I’m the author of the first book about teaching with wireless student response systems (“clickers”) that allow immediate interaction between a teacher and all students in the classroom. Technology and research have advanced since the book was published, so here is a two page summary of what works and what doesn’t when using clickers. Watch the excellent videos sponsored by Nobel Prize Winner Carl Wieman.  Most clicker users succeed.  We find that those who fail have not read the tips or watched the videos. You’ve been warned!

In 2011 I received the Richard Emmons Award from the Astronomical Society of the Pacific given for “Outstanding College Astronomy Teaching in the U.S.”

In my spare time I lead adventurous educational trips to solar eclipses (past) and future , and to the arctic to see and photograph the northern lights.   Please contact me if you want further information, and/or follow the links at the left.

Doug Duncan is a faculty member in the Department of Astrophysical and Planetary Sciences of the University of Colorado, and Director of Fiske Planetarium.